A federal court held that a school district may stop a coach from “speaking” about religion on the job. 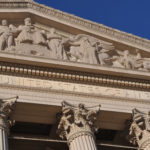 Officials at an Oregon high school had suspended one of its football team’s coaches for kneeling and praying on the field’s fifty-yard line. He had done so in view of students and parents immediately after games, wearing a jacket with the school’s logo.

He said he prayed on the actual field where the game was played because “prayer lifts up the players and recognizes their hard work and sportsmanship during the game.” The district would not have objected if he had waited until after the stadium had emptied and the players had left with their parents, but he insisted.

The coach complained to the court that his employer had retaliated against him for exercising his First Amendment rights. The judges decided that every coach has a professional responsibility to communicate demonstratively to students and spectators, and this one took advantage of his position to press his particular views upon the impressionable and captive minds before him. Since his demonstrative speech fell within the scope of his typical job responsibilities, he spoke as a public employee. The district had the right to order him not to speak in this way.